Kandy Esala Perahera (pageant) is one of the world’s most fascinating oldest pageants held in during the month of August in Kandy. This pageant is significant as a religious festival as well as a festival connected with agriculture as it is held to invoke blessings of deities to seek rain for a successful harvest.

As Sri Lanka is an agrarian society, people follow rituals that seek divine blessings for rain to nourish harvests. Kandy Perahera is a fusion of the Dalada Perahera (celebrates the arrival of the dantha dathuwa, the Sacred Tooth Relic of the Buddha and the Esala Perahera (ritual veneration the four guardian deities – Gods Natha, Vishnu, Kataragama and Goddess Pattini of Buddhism).

Highlight of the pageant is the Sacred Tooth Relic (enshrined in a golden casket placed on the magnificently decorated tusker of the Sri Dalada Maligawa in Kandy.

This pageant is a well coordinated celebration with a set of rules specified in ‘Dalada Siritha’, a book with methods to conduct the pageant, compiled during the reign of King Parakramabahu IV (1302-1326). Details in the book include elaborate ceremonies to be carried out before and after the procession. 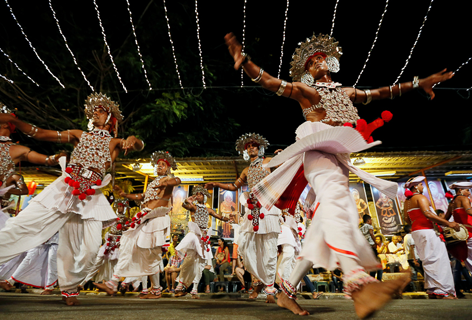 The ves dance is the most famous of the Kandyan dances 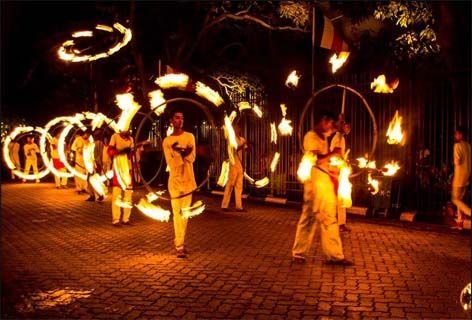 Kandyan dancers show their power over fire at Kandy Perahera 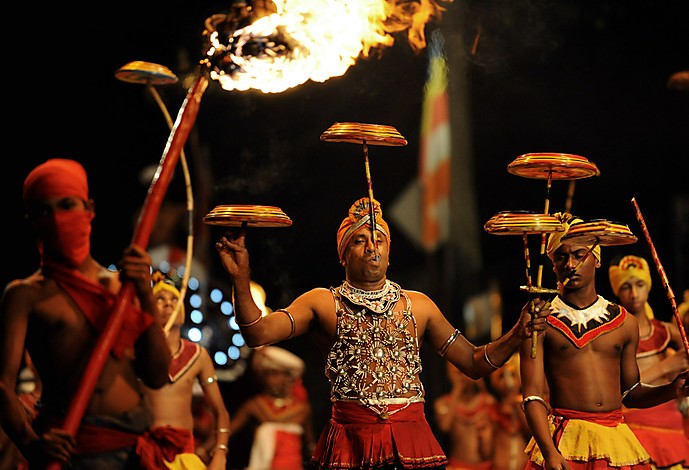 Each section of the pageant is equally significant; “whip crackers” and lamp bearers represent thunder and lightning and drummers and dancers, the sound of rain.

The agricultural roots of the pageant are evident in the key opening ritual – Kap Situweema (Tree Planting Ceremony) where the ritualistic planting of a post from a young jak tree (non-fruit-bearing and grown facing east). This post is planted at each of the devales, before the pageant begins to invoke blessings of the four guardian deities for successful conduct of the pageant and the new crop cycle.

The pageant is finalized with the ritual, the Diya Kapeema (water cutting) Ceremony held at dawn of the day following the final grand pageant where the priests of the devales wade into the Mahaweli River and ritually cut the waters with swords to symbolize the releasing water supplies (necessary for agricultural purposes) for the year ahead.

Laksala is the only State owned Gift & Souvenir Boutique and was established under the National Crafts Council And Allied Institutions Act, No. 35 of 1982.